The Erin Mills New Hamburg 300 brevet was a great ride yesterday for the 13 participants. It was a cool day to start with and it stayed that way until the sun came out for a few hours in the late afternoon. The first 72 km of the ride is uphill to Erin, lots of hills and climbing the Escarpment. The dreaded 3 km uphill climb on gravel road turned out not to be too bad as the road had become very hard packed since last year when it was freshly laid gravel and sand. This was especially good news seeing as it had been raining hard the night before.

Going west from Erin, the Hillsborough Hills roll west for some time and then the route continues south and west Maryhill, Bloomingdale and on to St Jacobs, then south to New Hamburg. We cycled past so much lovely farmland and passed so many Mennonites on the road with horses and buggies. What with the hills and the headwinds coming from the north and the west, the ride was challenging. A large group of us met up at the Subway shop in New Hamburg and sometimes a tuna melt is the most delicious food item in the world. Bob, Jean and Paul were finishing up their lunch when Marti and I arrived and the group of 4 – Arthur, Fred, Bob and Stan rolled in just after us. This was Bob McLeod’s first 300 km brevet and he shared some interesting memories that will stay with him, like the Peloton style bonding experience that only men can do along the side of the road! One can only hope they were sheltered from the wind at the time!

I experienced a brush with fate when I touched the back of Marti’s wheel on Charles St., a busy road going in to St. Jacobs and came flying off my bike and skid along the road in front of an oncoming car that was able to swerve around me as there was no oncoming traffic. Miraculously my body was not damaged, other than the huge bruise I am now sporting on my left thigh. We were able to untangle my bike, the handlebars had twisted around and were jammed under the cross bar. The handlebar tape is ripped, the left shifter bent, but otherwise I was able to ride home. It was a very close call and today I am singing the Hallelujah chorus, or I would be if I wasn’t so tired and sore! Thanks Marti for your kind support after that incident. I will be replacing my helmet before the next ride. As Paul says, it contains some bad karma now!

The trip to St. George was beautiful, everything so green and the sun came out as we rode along the Grand River to Blue Lake Rd and to St. George. Some good memories on the last leg of the journey include the big blue heron that we startled on Marlborough Townline and the beautiful big sunset that was happening as we turned on to Britannia Rd. Then it was a quick stop to adjust the night lights, don warmer clothes and full speed ahead to the finish. From the brevet cards dropped through my car window I see that Mark N and Stephen finished the ride together in just over 12 hours with Guy Pearce pulling in next, an hour and half later and then Henk.

The wind is howling outside my window as I compose this ride report. In the last half hour I have seen rain, sleet, hail and now it’s snowing. I am so happy not to be on my bike travelling through that open expanse of farmland today! Yesterday was warmer and less windy. Now, that calls for another Hallelujah! 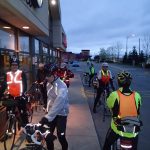 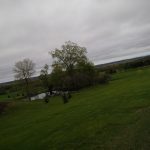 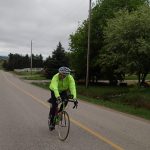 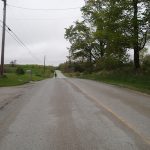 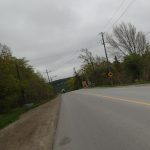 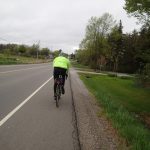 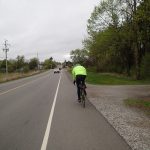 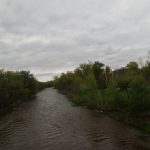 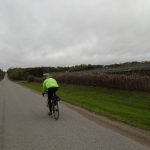 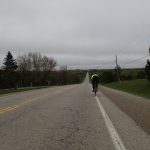 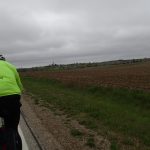 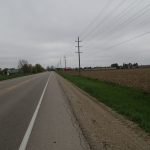 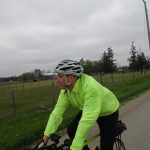 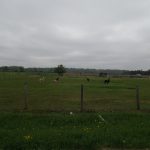 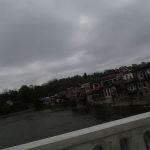 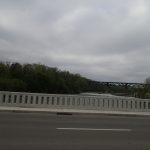 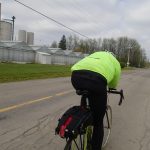 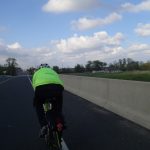