Huron Chapter hosted the Wiarton Willy 200 km brevet Saturday June 1st. Wiarton Willy started at Tim Horton’s at 0800hrs. From a Randonneuring point of view, this was the first time I had ridden with as many Women as there were Men in a Brevet! The Weather forecast was a little unnerving to say the least…thunder showers and strong West winds. We headed up the peninsula with our first turn in Oxyden towards Kemble Rock. After 19km we enjoyed the infamous Kemble Rock downhill… Donna and I took it easy on our Tandem until we successfully went through the short turn then tucked in … hitting 83 km/hr. We hoped we could have received a speeding ticket but no Police were around! Enjoying a tail wind and no rain we toured along before stopping at the Kemble Women’s Institute where Liz served Tea!

From there, the Randonneurs headed towards Owen Sound, passing through Balmy Beach, then Kelso Beach across a bridge in Owen Sound then back up into the peninsula towards the Hibou Conservation Area and Leith. As far north as this brevet went, the Randonneurs headed south stopping at Inglis Falls for some photos and relaxation. I let everyone know that Tilley’s Café and Bakery was just around the corner, so we got back on the bikes and headed towards Kilsyth. Our timing was perfect! The cookies were still warm and we all enjoyed treating ourselves…because we earned it!

From Kilsyth to Sauble Beach for lunch, we had to stop at about 89 km to let the Ladies put their rain gear on! No thunder yet, but with a light rain and BLACK clouds….we were nervous, and fortunately able to get to the Sauble Dunes Restaurant for lunch with only the West Wind to fight. From here we headed out to Sauble Falls, then to Oliphant where we toured the Lonely Island on our way to Pike’s Bay. NOTHING BUT SUNSHINE and a WEST WIND!! Somehow we lost Con as he left the Sauble Dunes Restaurant ahead of us in search of Ice Cream in Sauble Beach, he found the Ice Cream but we couldn’t fine him! So we stopped in Pike’s Bay, where the Ladies and I enjoyed our Ice Cream and then…as Con flew by…Liz yelled at him and we were able to get back together again.

Our next Control was at the Lion’s Head Inn, Lion’s Head. We enjoyed a beverage on the Patio before heading back up the Escarpment to Wiarton. The wife and I noticed the 9 and 10% inclines and fell a little behind Liz and Con before passing them on the downhill section leading to Colpoy’s Bay. Just before Wiarton we were all back together and arrived at the last Control with a few hours in the bank.

Before this ride I made reservations for 10 at Southampton’s Elk and Finch for 19:45. Knowing that Bill Little couldn’t do the ride, I emailed him and told him to join us, but call in and make additional reservations. Bill showed up at the Elk and Finch on time and wondered where we were. He called me on the cell phone and I let him know that we would be late, so asked him to touch base with the Chef Bill Hodgkins and let him know we’d be 1/2 hr late. While standing there, another Lady that he didn’t know heard his discussion with the Chef about the Randonneurs being late for dinner and let him know that 6 of the 10 people who were having dinner with the cyclists were already there! Bill enjoyed meeting everyone and then enjoyed teasing us when we arrived! 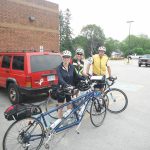 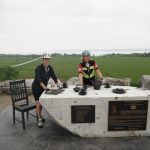 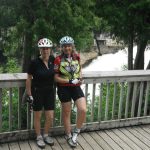 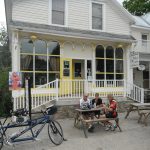 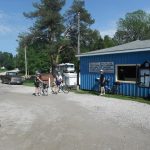