Since rediscovering my bike and committing to more riding, I’ve been motivated by the stories of randonneurs and their many inspiring journeys. I’d like to share my experience of a cold, wet 300 km brevet that I ran as a permanent. Was it fun? No, not really… no. Was it rewarding? Completely!

My long distance training did not start in earnest until May, so I was already well behind the brevet schedule this season. But I set myself a target to ride a 200 km brevet before the end of the summer and was thrilled to discover that I could run a permanent if needed.

The first 200 km permanent was the Merrickville route, a flat though scenic romp through the countryside. Then I rode the Chenaux 200 and managed the Tour d’Essex 200 while I was visiting relatives in Windsor. After Merrickville, I wondered out loud to Vytas with whom I was riding “how is it even possible to ride 1200 km PBPs when I can’t even get my head wrapped around doing 300?” But after the latter two brevets, I began to understand how. The body becomes more machine-like, I think. Feed it, move it, and go far.

With this in mind, I put together a plan for some additional permanent brevets to ride this fall, including the Animalathon 300 which was scheduled for September 13. About a week before the brevet, the weather forecast called for sunny skies and a high of 21 C, ideal riding conditions! But as the big day got closer, the forecast changed to partly cloudy with a chance of showers, then to full on rain.

The question I faced was: do I ride the 300 anyway? I figured that I could not only get experience riding a 300, but I could also learn a lot about what it takes to ride in the rain. So the answer was YES.

I pulled out from the Carp Road Park and Ride at 4:00 am. It was raining but fairly mild, so nothing I couldn’t handle. At that time on a Sunday morning, there was no traffic at all and it was quite pleasant working my way up towards Almonte and Tatlock. Around the 50 km mark, the dark melted away into a grey sky and I got a sense of my surroundings. I began heading into some hills toward the first control point at Calabogie. Feeling good and making decent time, I was also getting used to the rain and discovered that after a while, it almost becomes forgettable.

When I arrived at the restaurant control in Calabogie, I had banked some good time so I decided to relax, have a hot meal and get some coffee into me. Other patrons in the place were curious about who in their right mind would be riding in this weather and for that distance. Yes, “right mind” indeed. The next section to Eganville had the most climbing in it, and since I’m not a climber, I didn’t want to rest too long. As I prepared to leave, the rain had given way to a torrential downpour. The cashier eyed me with one of those “you’re not seriously going to ride in this” looks, and for a brief second I debated whether to abandon the rest of the ride or not. Oh well, I thought, I’m already soaked so I’d get myself to the next control and reassess things then.

Riding in the pouring rain through the Calabogie Highlands was not fun at all. Not. One. Bit. I found no joy in spinning up the many hills. There was no beauty in scrabbling my way through mud and gravel construction zones, trying to keep the bike steady while being shunted around by wind and water. When I finally got back to some decent pavement on the road to Foymount, little did I know what was in store for me. There I was tempting fate with my “wow, well it can’t get any worse than that” attitude, but fate is not to be trifled with and I had my come uppance coming up!

The Foymount hill is not a hill. It’s a mountain. It stretches 10 km long and for the most part is nothing but climbing. I need to point out that I’m not a climber… I’m a clydesdale who likes to just plod along at a steady pace and do my thing. Even so, I have trained in the hills in Gatineau Park and figured with my granny gear I could just sit and spin for however long a climb could be. So there I was, not quite spinning up the mountain at 6 km/h and not quite daring to look up at the endless climb. At one point, the grade turned so steep that I couldn’t keep my bike steady and had to dismount and make a 200m walk of shame until the grade subsided a bit. I believe it was at this point where I had thoughts about abandoning the ride as soon as I got to the next control. I was cold, wet, tired and beaten up by these brutal hills.

But then something almost magical happened. I was at or near the top of Foymount when I saw that I was actually now in the clouds. This was not a “cue the angel music hallelujah let’s do that again” kind of thing, but it was an amazing feeling. And finally, after about 10 km of relentless climbing, I began the earthbound descent towards Eganville.

My knees were aching and my thighs were burning and the thought of DNFing was actually looking pretty good as I made my way down the mountainside. By this time, my front derailleur decided it had had enough of the madness and stuck itself on the small chain ring. No big deal, I thought, that’s where I want to be anyway!

Finally, I arrived in Eganville at Big Moe’s gas and restaurant (Eat and Get Gas Here!). The rain had eased up a bit and my spirits were improving. I had a bowl of soup and some fries and my disposition, while nowhere near sunny, had mellowed out nicely. I was still okay time-wise, thankful that I’d banked some up in the first leg of the ride, and hopeful that the worst hills were now behind me. I was just over half-way through the ride and decided to keep going and to reassess again in Renfrew – about half way to the next control.

As I started out from Big Moe’s, my Garmin could not locate the route… some kind of glitch when I downloaded the file, I supposed. I tend to follow the cue sheet anyway so this was no big deal. I just set the Garmin to record the ride. Meanwhile, the rain had returned again but this time the wind was at my back and I made good time to Renfrew and had no doubt about continuing on. Although, I did let fly with the F word when I saw that one big hill I had to climb on the way out of Renfrew…

I sailed down towards River Road that follows the Ottawa River to Arnprior, and it was then that the heavens really opened up. This was not just a steady rain: this was an epic dumping of biblical proportions. When the rain hit the leaves, it sounded like a waterfall. Sheets of rain flowed over the road. I was not happy. This time, it was coming down so hard that the water had worked its way through every layer of clothing I had. Oh, make no mistake, I was wet through and through, but now I had the unfortunate pleasure of feeling the water trickle over every pruned part of my body.

But lo! There in the southern sky… could it be a break in the clouds? As I approached the penultimate control in Arnprior, I spied a distant patch of light. At last, I thought, maybe the last leg will be dry. I eased into the Tim Hortons, reacquainted the nether regions with the white cream, and had a great meal knowing there were only 53km to the finish and I would easily make it there on time and on familiar roads.

With about 40 km to go, the grey skies turned to night skies. I was still playing tag with the downpours but even they now gave way as I turned onto Diamondview Road on my way to Carp. I was able to pick up a bit of speed and began to understand how randonneurs can keep going for amazing distances. For me, it comes down to making sure I eat a solid meal at the controls and then continue to graze and drink as I ride.

As the end came into view, I was struck by how much I had learned about me, my bike, and managing a ride. I pulled into the finish at the Park and Ride at 21:14 for a total time of 17 hours and 14 minutes. And the crazy thing about it was I felt I could do even more if I had a hot meal and didn’t linger too long.

I will do the Animalathon 300 again. It is challenging for this here non-climber. And now that I’ve done it in the rain, I feel I can cope with any wet ride. Oh, and now those 200 km brevets look like pretty simple little rides! 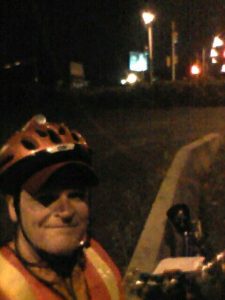