The Huron Chapter started their Entertainment Series Brevets with the Much Ado About ….. on Saturday, 7May2016. 18 of the 19 Cyclists finished this 200km Brevet …. wait …. all 19 actually finished this brevet, just one was outside the time limit of 13.5 hrs. The weather forecast leading up to Saturday was not positive … wind and rain. Somehow I guessed the actual weather to be sunny, with the rain only happening when 7 of us attended the Shakespeare in Love Play.  Bob Kassel can confirm my weather forecast as he has the e-mails I sent.

The Much Ado About …. had Sunshine and a blue sky for the first 100km. A few clouds came in after that, with a few rain drops but nothing to be concerned with. The Stratford Control was where the Randonneurs split up, 7 had tickets to the Shakespeare in Love play and the rest of the Randonneurs had lunch and simply carried on.

I enjoyed the Shakespeare in Love play, which does it’s own lifting: from Romeo and Juliet, we tended to sentimentalize Romeo and Juliet so much that we forgot that they did a really STUPID thing. They had an incredible death wish, they knew they were going to kill themselves! At the end, an emotional reaction was obvious … just looking around at everyone!  I’ll see it again before year’s end! 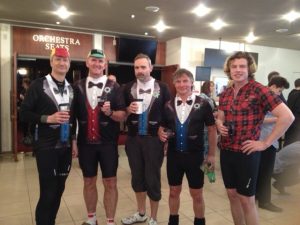 The play ended around 1645hrs, the rain had stopped so the 7 of us got back on our bikes to finish the last 64km before 2030hrs. With  50km to go we passed Jakub Ner, but only after taking some photos!

Jakub Ner on a Unicycle! 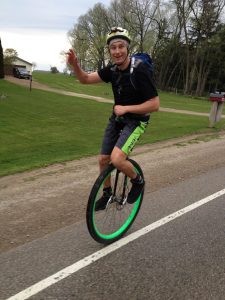 Now, over the years we have done brevets on standard bicycles with Jakub, but this performance was a FIRST! I have never seen a Unicycle being ridden on a brevet or even heard of someone attempting it! Had to ask Jacob where he got this idea from and he made it clear that his children didn’t like riding with him on his regular bike so he purchased the Unicycle and goes everywhere with his kids!!!

What an awesome brevet! Entertaining from Beginning to End!