On August 2, I rode the Elephant Lake 200 as a permanent as part of my training for the GA 1200. This route begins in Bancroft, wends its way around Elephant Lake to Maynooth and Barry’s Bay, then circles back to Bancroft via Schutt and McArthur’s Mills. Much of the route covers the same hills – I mean roads – as the GA 1200 so I was looking forward to the challenge.

Rather than spend the night in Bancroft before the ride, I left Ottawa early in the morning and began the ride at 7:30. Almost immediately I was hit by some nice long hills to climb but these were babies compared to what was ahead of me. The weather was cooperative: sunny, hot and humid with a SW breeze, and the traffic was reasonably light. This section of the ride was beautiful. Quiet roads, good hills going up and down… I was thinking this route could easily become my new favourite. I rehydrated in Maynooth at the gas bar there and then continued on towards the next control at Barry’s Bay.

Highway 62 was busier, at least until the route turns off at Centreview Road towards Siberia Road. Again, more hills but nothing too scary. That all changed on Centreview Road. The first couple of climbs were really challenging and my granny gear got a serious work out! I thought to myself “so this is what the GA tastes like” and just kept pedalling.

I pulled into the Subway for lunch at Barry’s Bay, still in good time of keeping a 20km/h inclusive pace. Bit of a line up in the restaurant but the A/C felt great. I stayed there about 30 minutes, filled the water bottles with ice and water, and headed back out on the road. By this time, the humidity was intense and I made sure to keep drinking. Moreover, the forecasted thunderstorms looked like they would make an appearance as the skies grew cloudier and the wind really picked up.

The ride towards Schutt was relatively flat. I mean, not “flat” flat but no major climbs.  I stopped at Hanna’s grocery store in Palmer Rapids just before the turn on to Schutt Road to rehydrate again and by this time, the skies were threatening. As I started climbing in to Schutt, I heard the thunder rumbling all around me and the clouds were blackening. I knew there was the little white church at the top of the Schutt Hill and hoped I could make it there before the storm hit. 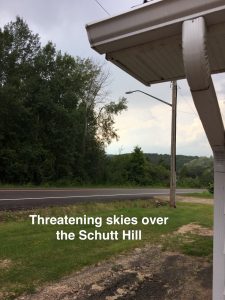 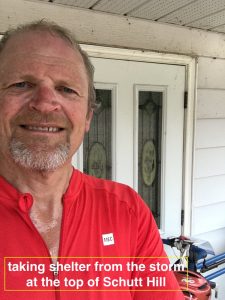 As it turned out, just as I hit the church, the rain started coming down so I took shelter under the church awning to wait it out. The radar showed some intense cells all around me but nothing sustained, and in fact the rain was just about over in 15 minutes. However, all around me I could still here thunder and see dark ominous clouds. But I was only about 47 km from Bancroft at this point and was ready to finish and cool off in some A/C.

The rest of the ride – mostly along highway 28 – was uneventful weather-wise. Traffic picked up again along this road but most of the cars and trucks gave me lots of space… good thing too as there were no paved shoulders and the sides of the road were crumbling in many places. I stopped at the store in McArthur’s Mills for more fluids around the 180km mark and kept going. There were more hills on this road too, some of them challenging, but the last km or so is a nice downhill into the town of Bancroft. The town was preparing for the annual Gemboree and there was a lot of activity with signage and such so I could imagine the crowds coming in on the weekend.

I finished the ride in just over 11 hours and was happy to have ridden several of the GA 1200 hills. Before heading back to Ottawa, I changed and cleaned up in the McDonald’s, satisfied my hunger with a mighty Angus burger, and got more fluids for the drive home.

All in all, despite the traffic on 28, this is now my new favourite 200 route. Very scenic, great roads, challenging climbs… it’s all there.