A TALE OF TWO FLÈCHES…

The HURON BOYZ and The HOGTOWN EXPRESS successfully completed this year’s FLECHE. Congrats to both!

Bob Macleod from the Hogtown Express and myself (Chappy) from the Huron Boyz kept in touch during the 24 hr ride. Both Teams started from different locations at 1800 hrs on Friday, May 18th and finished at 1800 hrs on Saturday, May 19th at the Village in Blue Mountain.

As you may or may not know, FLECHE teams must consist of 3 to 5 bicycles, so if you had 5 Tandems then you would have 10 cyclists. Steve Jones and his wife Andrea Ferguson Jones were on their Tandem for the Hogtown Express along, Martin Cooper, Charles Horslin, Bob Macleod and Erin Marchak.

Look at the happiness the Hogtown Express showed around 0330 hrs Saturday morning, that’s right 0330 hrs!  They were in Orillia at the Casino! Bob claims they were not smiling because of the big winnings, but the awesome noodles they had!  I wish that had been us! 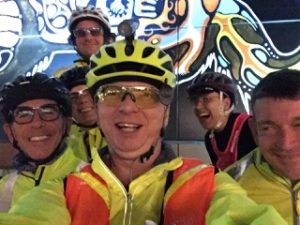 Now, the Huron Chapter has somewhat of a different story. As I mentioned previously, FLECHE teams consists of 3 to 5 bicycles, well the Huron Chapter had 3 bicycles and only 3 riders. No Tandem in our group. Initially we had no problems with 5 cyclist participating in this year’s FLECHE. Once the Route was planned two fellow Randonneurs cancelled. Why … too much climbing … and too much distance! Then Jerzy Dziadon asked if he could become one of the Huron Boyz and that brought us to 4 cyclists participating … the more, the merrier!

On Friday, Jerzy planned on driving to Blue Mountain, dropping off his car and pedalling to the START. Sometime during the day, Jerzy let us know his he was having car problems, had made it to Orangeville then decided to head home, now the Huron Boyz were back to three.

The three of us pedalled to the Wismer House in Port Elgin a few hours early to have something to eat and gas up our fuel tanks. Unfortunately, being a long week-end, local police were out and about making sure everyone was playing by the rules and if not …. 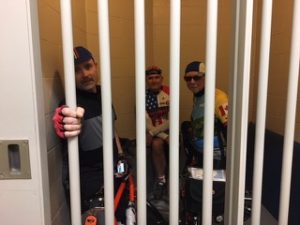 We talked about cyclists and automobiles on the road and that rules apply to both. Stop Signs, Red Lights etc. Then we continued on to the Wismer House, sat on the patio in the sunshine, digested plenty of carbs and prepared for our Start! The scenery, road conditions and weather were perfect all the way to the southern end of Point Clark. Here’s a photo of John and Chris leading the way. 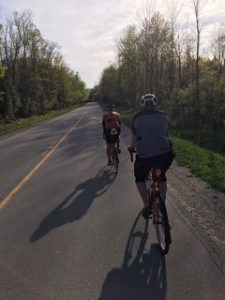 Once we turned and headed EAST, things changed. Headwinds, dark clouds heading towards us and a Bridge on route REMOVED. Yes REMOVED. So we headed East a little further to find a road that eventually got us back on track!

Now, having seen the fun that the Hogtown Express had at 0330 hrs Saturday morning, I thought you should know of the fun we were having, we were down to our last water bottle, no food other then M&M’s and peanuts that we carried and that no restaurants or coffee shops existed! Chris noticed a town park with picnic tables under a roofed in area that we could use by taking a quick nap, so we did! Ruffly 30 mins later, we were up, refreshed and back ‘atter.  The original rain forecast had us thinking we’d be wet from 8 am on, well it was raining at 4 am. So we put our weather gear on and headed out.

This is where our story gets even better, having developed this route myself, I didn’t pay attention to detail. 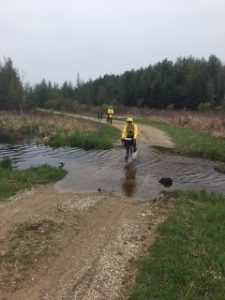 With 2 km to go, the most flooded area had to be crossed. I decided to get off my bike and simply walk through it, John followed me … then Chris decided to pedal through it to prevent getting both of his cycling shoes wet. Well, he made it through … but both pedals went fully under water!  Arriving at 0 km to go we finally made it back to paved roads! Yahoo!

We continued on route, Stopped at 22 hrs to record our exact time and location then headed towards the finishing time of 24hrs., knowing that 25 km minimum had to be done during the last 2 hours. Sound EASY? Sure it does, unless your pedalling the route that I created. It turns out that all the North and South roads were GRAVEL, the East and West roads were PAVED. I don’t know why, I didn’t plan on putting us through this on normal Randonneuring bikes, I don’t know how I missed this info …. If one of us had 700 x 23 tires or smaller we would have had to walk a few sections, fortunately we simply travelled at 11 to 18km/hr heading North.  John looked at me and questioned if we were going to be able to get 25 km in the last two hours. I didn’t know, wasn’t sure. Chris has always been my map man, knows where were at, where were going, looked at me and said for the first time “I don’t know where we are or where were headed” he didn’t have that positive gut feeling that I was used to. Well, fortunately we finished the 25 km in the last two hours (actually 40 km) for a total distance of 390 km for this FLECHE.

Now we had 50 km left to pedal to the Blue Mountain Village following our Fleche Route. Having reached the 24 hrs mark, the 2018 FLECHE was officially done, so Chris took us on a different route back to Blue Mountain that had 42 km DOWNHILL. WOW! I will develop a new Brevet using these roads at the finish, felt like a reward for what we had just gone through!

The Huron Boyz rented a Condo in the Blue Mountain Village and were able to use a Shuttle at no cost to the Village (24 hrs / day). Having touched base with the Hogtown Express, they told us some of their Randonneurs were falling asleep during their bowl of soup and would see us for breakfast the next day.

We had a lot of laughs, loved all the stories we told about the 2018 FLECHE and enjoyed breakfast before heading home. 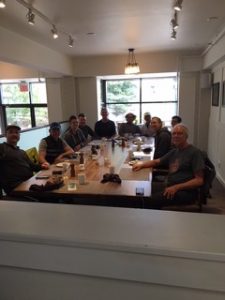 Thanks for the excellent ride report Carey. The reunion breakfast in Blue Mountain Village on Sunday was excellent – you’d never guess the HURON BOYZ had such an epic adventure the day before, what with all the gravel, marsh, wind and lack of services – congratulations to you Carey, Chris and John.

HOGTOWN EXPRESS, with 6 cyclists on 5 bicycles (see names in Carey’s report), completed 368 km with about 1600 m ascent in almost luxurious conditions compared to the Huron team. New Randonneurs Ontario jerseys and cycling shorts had just arrived, so we were all kitted out like a real team. Our route took us northbound out of Markham, circling Lake Simcoe from its south shore eastward, to Honey Harbour on Georgian Bay, and then westbound along the Georgian Shore to Blue Mountain Village. Except for a few short stretches of gravel because of spring construction, road surfaces had good pavement. There was a brisk southeast wind, so most of the time it either wasn’t a factor or helped push us along. Overnight temp’s got down to 9C and daytime highs never exceeded 18C, so quite comfortable, and except for a steady 3 hr downpour starting 8 am Saturday, the weather was dry. Fortunately, we had rest stops with services evenly spaced along the route, with the highlight being the Noodle Bar at Casino Rama (158 km) which was very welcome at 3 am, so we stayed well fueled and hydrated. Scenery was beautiful and traffic volume very light, except for the last 20 km busy stretch into Blue Mountain – so an awesome experience. 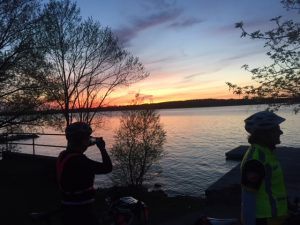 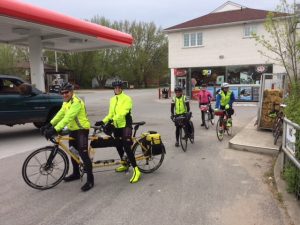 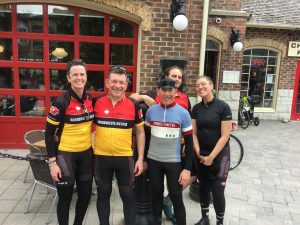 This was a 1st Fleche for Martin Cooper and Charles Horslin, so a special congratulations to both of you! Congratulations too for Andrea, Erin and Stephen, who also successfully completed the event. 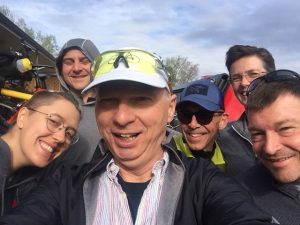 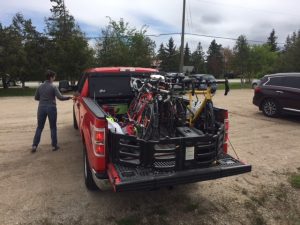 Another successful and memorable Fleche event!! Thanks to everyone who helped make it a success.