The first ride of Devil’s week was the Chenaux 200, a wickedly scenic route up the Ottawa Valley along the huge Ottawa River and across the dam at Chenaux and back down to Quyon to cross back on the ferry. The ferry is pulled by a cable on the shore instead of being a motor boat… kinda neat and very quiet. I thought there would be more climbing but was happy with the few good kickers we had along the way. The forest was lush and quite aromatic at times. Scenery highlights included crossing the only 5 arch stone bridge in North America

Sunday was the Vennachar 300, which was an amazing day on the bike! The scenery was breathtaking and the climbs were challenging. The weather was quite favourable for the first 200k with some sun in the morning to take the edge off the cool air. Soon clouds moved in which kept the sun off us. We had lots of rain for the last 80k but it also brought a nice tailwind and thanks to Peter Grant for loaning me a rain coat so I didn’t freeze. I forgot to pack a few important things for the week, namely my helmet and a rain jacket. Thanks to Peter and Guy for loaning me theirs for different rides! Ben and John were great company all day and we rode a good pace. I think this is a personal best on a 300 for me, 14:54.

Tuesday’s route was the Athens 400. Lovely scenery and an amazing loop through the shield but also one of the hardest rides I’ve done before… could say it had the good, the bad and the ugly. The good part was having a solid gang to ride with for the first half, we had a nice sit-down breakfast at the first control. There is so much history in the area and later on in the evening I saw a nice rainbow. The bad part was the 200km of varying headwinds and another 50km at the end… to top it off the high was only 16 and the low was 8. The rain held off for 250km but came down hard for an hour or two. The ugly part for me was breaking a spoke on the front wheel, a low spoke count one too! Forgetting that my multi-tool has a spoke wrench, I rode the bent wheel for around a 100km before remembering the spoke wrench. Luckily the rims are really strong and I was able to pull enough of the wobble out to stop the brake rub and was able to ride a bit faster. The wheel never got any worse during the ride. It was after sorting out my wheel that I was on the scenic Jones Falls road that the skies opened up and I did get a little cold on this stretch but thankfully it was a short rain and the air warmed up after this. There was about an hour of daytime left at this point and it wasn’t long after that I was treated to a spectacular rainbow which helped raise my spirits a bit. I was able to finish the ride with a couple hours to spare but I did find the last 50km to be a slog through the flat areas with a slight headwind. Randonesia had set in less than 6 hours after finishing and I felt fine the next day! Typical 🙂

To round out the week, Barry’s Bay 600 was the final course on the menu. An epic route through a big swath of the Canadian shield. Our weather was great aside from a bit of headwind during the first 100km. I fell off the back of the group at the first control and did most of the ride alone, which was a nice change after riding with folks for most of the other rides. I tried to keep my control stops a bit shorter than normal to build up some sleeping time. The sun was mostly shining on Thursday but didn’t get too warm. The humidity did get worse until sundown, then disappeared once the night was upon me. I made Barry’s Bay around 2 and managed to get 3 hours of sleep. Woke up and was heading out to Timmies around six. I ate too much breakfast and had a helluva time getting started but managed to keep the pedals turning for a few hours until second breakfast in Eganville. The controls were evenly spaced so that made for a predictable day. I stopped for too long in Calabogie since they had vegan pizza and fried cauliflower wings at the restaurant that was the control! Again I ate too much (story of my life) and had a bit of a slow go for a couple hours. The hills were challenging on both days but worth all the effort, not just for the descents but also the views. The route slowly flattened after leaving the last control in Clayton as we approached the Ottawa Valley and there was a small gang of randonneurs at the finish to welcome the riders back!

All in all I had a wonderful week and would like to thank Guy Quesnel for organizing, providing breakfasts, and supporting on the 400k, Peter Grant for route planning and supporting on the 300k. As well as a special shout-out to Vytas and Colleen for doing dropbags and support overnight on the 600K. We went through some sparsely populated areas and it would have been difficult to resupply without all of them! Also thanks to everyone I rode with, it was a great week of randonneuring.

I took a big pile of photos so if you wanna give ’em a gander they’re all captioned and sorted here: 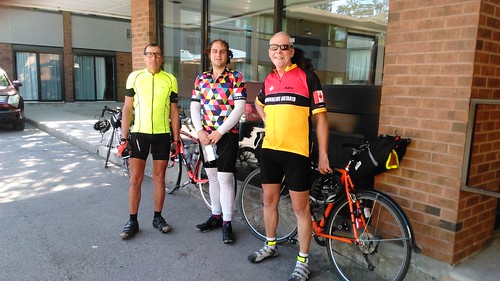