Last week we rode the Much Ado About … brevet starting in London. Nine riders started out at 7:00 for a nice ride on a beautiful morning. Carey Chappelle and I had tickets in hand for The Shakespeare Festival’s production of The Taming of the Shrew in Stratford at 2:00. On the way out of town Carey had a flat tire which put us a little behind since we had to cover the first 140 km to Stratford in 7 hrs. Easily enough done but the intention was to do it at a leisurely pace and not be any more sweaty and smelly than we had to be when arriving in our finest theatre going apparel.  i.e., cycling clothes. We rode at a steady pace and eventually caught up to Cori Dean who was riding comfortably along and enjoying the day outside of Sebringville. I later found out that she broke a spoke and wobbled into Stratford and had it repaired for free along with topping up the air and some minor adjustments at Totally Spoke’d bike shop in Stratford.

Carey and I stopped in Milverton to pick up a sandwich to eat along the way but the restaurant was too busy. We knew that Annie May’s bakery which is the first control in Milbank would be crazy busy so we wanted to save time. A Mexican Mennonite grocery in Newton didn’t pan out either. Annie May’s was busy with a busload of seniors so we each picked up some cookies and date squares to go. Outside waiting were John Cumming, Michel Hebert, Fred Krawiecki,  first timer Dave Mott and Steve Wright. Fred plodded on ahead. Carey, Steve, John and I headed to Stratford where we settled into the Boars Head Pub control with 48 minutes before showtime. This gave us enough time to get a hot meal and two pints of beer before riding back to the theatre where we entered in all our glory with a minute to spare. The beer in my water bottle was a classy touch I thought. Had to drink it quickly since it foamed up when I pored it in and my camelback bottle was making farting noises as it released the pressure. Can dress him up …   Just before we left the pub Dave Pearson checked in and continued on ahead.

The play was excellent. It took about ten minutes to get attuned to the olde English and be able to follow along easily. We had joked about possibly cramping up during the play and sure enough my left hamstring went nuts during the second act and all I could do was straighten it out and do a silent scream. After a minute or two of heavy breathing it settled down. It was good thing that there were four empty seats around us so it enabled us to spread out and get comfortable. No armrest wrestling required. Even our musk was covered up by all of the perfume around us. At the intermission we had a glass of red wine with cheese and crackers while having our picture taken posing by the grand piano in the lobby. The play was well done and provided lots of laughs while probably making any feminists in the crowd seethe over the breaking of Katherina  (the shrew) to her new husbands demands. Enough said about that. In whole it was a great experience and our seats were excellent. Actually there’s not a bad seat in the house.

We left the theatre after another picture, made our way to Tim’s to fill up our bottles and left town at 5:15. The last 65 km went by easily and we arrived at the Tim’s to finish in 12:51. Fred Krawiecki was driving by after returning from dinner and stopped in for a coffee and a chat about the ride. All in all it was a great day. Everyone finished and enjoyed the day. 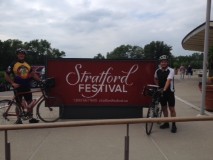 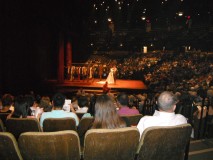 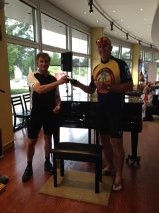