Yesterday, I rode the Much Ado About Nothing 200 as a permanent. I’d been looking forward to this ride for some time. My son attends UWO so we were there to pick him up and move him out of residence… a perfect excuse to get a permanent ride in!

I rode out from the hotel bright and early as the sun was rising. I started the ride from the Tims control in East London, wending my way north. After a few km, the urban gave way to the rural and I was cruising along back country roads, feeling strong in the bright sun. And, despite forecasts of strong, gusty eastern winds, they were a non-factor for the first 50 km or so.

When I rolled into St. Mary’s, the main street was a massive construction zone. Not much traffic, so navigating it wasn’t difficult. Now, I have some ancestry in this area. My great grandfather grew up in Perth County before heading to the Eastern Townships, and I have relations still farming around Arthur, just north of Millbank. As such, I felt an odd, comfortable draw to the area, its scenery and the smells of rural Ontario.

As I pulled out of St. Mary’s on my way to Millbank, the forecast winds appeared and that made the ride suddenly a lot tougher. When I got to Anna Mae’s Bakery – the first control – I was ready for a break. The wait line in this Amish eatery was massive, so I just bought a couple of pastries and ate them in warm sunshine before getting back on the bike. I passed a peloton coming the other way with the wind at their backs and they flew by! When I eventually turned west toward Stratford, I had the wind at my back and could basically ride along, sans pedalling, at 30 km/h. It was sweet.

As you can imagine, there was plenty of heavy farm machinery at work and on the roads as farmers prepared their land for planting. While some of the roads were busy with traffic, most were quiet and afforded me the chance to look around and see the sights.

The ride into Stratford is beautiful along Lakeside Drive. Swans, ducks, old trees and of course, theatres! I checked into the second control and had a snack.

The last 65 km back to London were great. For some reason, I seem to feel the strongest for the first and last 50 km or so of a 200k, but that middle 75 km – 100 km is a mental and physical wasteland. Not sure why that is, but nevertheless, I was finishing the ride strong. I came in past the London Airport in light traffic, and flew west along Trafalgar back to the finish control. My time was 11:01.

From there, after a chocolate milk, I rode back to the hotel feeling like I could going. I love finishing a ride strong! Susan and I had supper at the what-used-to-be-called-Big-Boy restaurant, and our son joined us later after a day at Grand Bend with his friends. All in all, a great time in London. 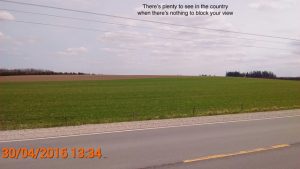 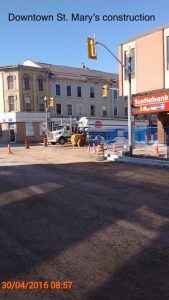 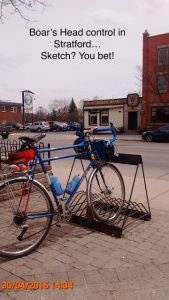 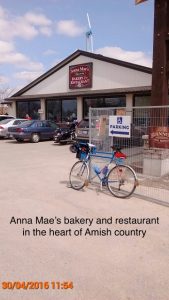 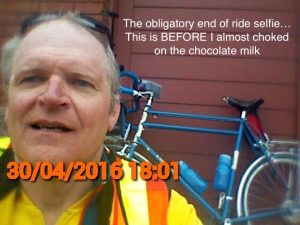