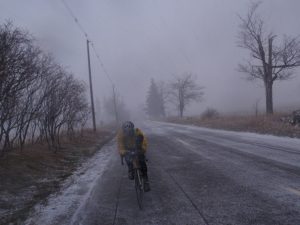 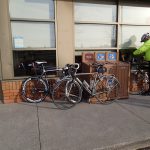 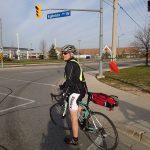 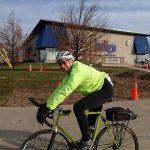 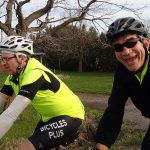 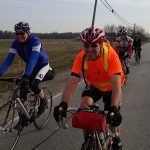 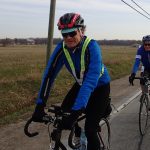 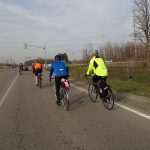 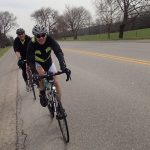 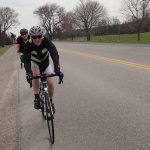 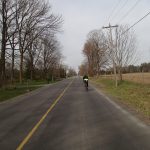 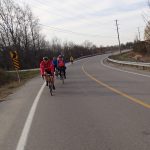 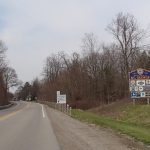 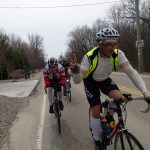 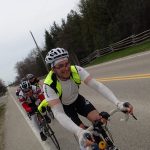 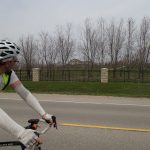 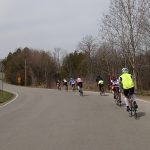 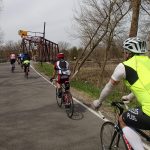 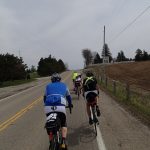 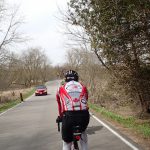 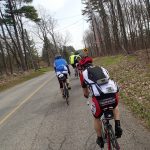 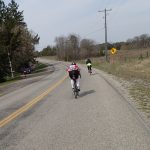 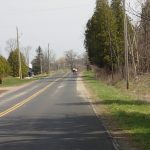 Well 4 mad men aka Randonneurs started today. One dropped off early and Henk turned back about 10 k short of Erin. William and myself carried on for the whole ride. 40 K winds from the west gusting to 52. The temp never got above 3 c and we got to experience snow, sleet and ice pellets. As William said this was good training for the upcoming Gentle Start. We got to climb Bell School line max Grade 23%, Appleby Line Max Grade 21% and 6th Line Max Grade 19%

We had nine riders on eight bikes as Peter and Peggy make another appearance with their tandem. With yet another Peter on the ride. I’m starting to think we should all change our names to Peter and be done with it.

It was a windy, cold, and wet day. The weather included periods of Scotch Mist, drizzle, rain, and snow/ice pellets. Fortunately, the wind was from the “right” direction, giving us a nice tailwind for the trip home.

Despite the weather and the somewhat desolate looking farmland, the scenery as we got into the Escarpment area makes the effort worthwhile. Small waterfalls trickled down the slope to feed the swollen rivers. The climb up Forks of the Credit Road, with its switch-backs and forested slopes is the highlight of the trip.

As is typical for a Randonnuer ride, we had a closed bridge to cross. The multiple signs advertising “no exit” and “bridge closed” as we rode along The Grange and McLaren had us wondering if we would be forced to back-track. But, the bridge was actually in fair condition for cyclists, with an easily negotiated barrier at the north end.

The Belfountain area was still feeling the after-effects of the winter storm that swept through last week. Many of the homes along the route had portable generators running and the air was filled with the smell and sound of chainsaws. The coffee shop in Belfountain itself was closed due to the power outage. Pressing on, we found a place at Olde Base Line and Hwy 10 that more than satisfied our appetites.

After lunch, we rode through Lloydtown, which Robert tells me is steeped in the history of the Upper Canada Rebellion. By the time we made it back to Maple, the Sun was actually peeking out occasionally.

Our newest member on the ride, Bashir, now knows why so many of us have fenders on our bikes. I wouldn’t be surprised if his wife made him shower with the hose in the driveway to get all the mud off.

As Peter L., said, the ride was character-building.

My thanks to all who came out for the ride. It’s still early season and it was a bit chilly, but then this isn’t call “Ice Classic” for nothing. Many of the small lakes, including Musselman were still ice-covered, and there was even some ice over Leslie St where it curved around a small lake/pond. At least the sun stayed out until the afternoon, though the wind picked up from the southwest making the return less speedy. A special mention to Bashir who joined last month and completed his 3rd ride of the season.