VAUNE DAVIS: “If you had asked me five years ago if I’d be doing this, I would have said you were crazy.”

At age 54 Canadian Vaune Davis became the oldest woman to finish the Race Across the West, completing the 878 miles in 3 days, 14 hours and 26 minutes. “I’m thrilled to have set the record as the oldest woman to ever finish that race,” she wrote in a recent e-mail to RAAM Media, “That was my goal. And doing that while also getting Rookie of the Year is kind of cute!”

Since age 19 Davis suffered joint pain that was diagnosed as psoriatic arthritis: her body’s immune system was literally attacking her joints. She endured decades of pain and extreme fatigue and her feet, hands, elbows, shoulders and neck were all severely damaged. Thankfully a then new biological type of drug was approved 12 years ago that helped her condition, “I went into full remission and within five weeks I had energy spilling out of every pore and no pain,” she said in a pre-race interview with the Toronto Star. Sadly many of her joints were already badly damaged through the years, but her hips and knees still functioned reasonably. So at age 42 she took up cycling and eventually joined a local bike club, “I would go ride with them for an hour and I’d get dropped in the middle of nowhere by myself,” she said. “But that didn’t bother me. I would just continue riding. If they were doing a 75-km ride, I’d do 150. I found I didn’t get tired and I enjoyed getting lost in the ride.”

Since then Davis has become quite the UltraCyclist. A notable recent result came in this year’s 24 Hours of Sebring where she surpassed her previous 24-hour personal best (333 miles) by racking up 353 miles. She’s also earned Ultra Marathon Cycling Association (UMCA) World Cup and Ultra Cup age group championships.

Earlier this year she began experiencing knee pain which unfortunately led to a sad realization, “The MRI and blood test results were a shocker: my arthritis had not only figured out how to outwit the $22K-a-year miracle drug, but it was chewing up my knees. I had severe cartilage loss in both, inflammation in my hips and elbows, and a double-knee replacement instead of a double-century in my future.” So far she’s avoided that drastic surgery and instead has relied on biweekly physiotherapy, acupuncture, cortisone shots, synthetic joint fluid, anti-inflammatory drugs, a new drug combo: Humira (an immunosuppressive drug) and a chemotherapy drug called Methotrexate, plus knee and glute-strengthening exercises.

With the help of all that treatment and her coach Peter Oyler (a RAAM and RAW finisher himself) Davis arrived at the RAW start in Oceanside, California fit and ready. “She’s an average person going to do something pretty extraordinary,” Oyler said. She was aided by being as she describes, “One of the best-crewed racers in the field… you’d never know it from my speed.” That crew included Oyler, his 2013 RAAM crew chief Janet Wilson and Team Hoodoo finisher Suzy Nelson, who has also crewed RAW before. “I had an A-Team behind me.” They assured that Davis stuck to her simple plan in Durango, Colorado, “Always stay on the bike, keep moving, don’t stop, whatever you do.” As extraordinary as her story is to others, Davis can’t quite grasp its enormity herself, “If you had asked me five years ago if I’d be doing this, I would have said you were crazy,” Davis said. But in the end, she not only overcame the pain and the challenges of riding across deserts and mountains to reach Durango, she did so with smiles and a cheerful attitude despite the pain and a demeanor that endeared her to the whole RAW and RAAM family, many of whom remember her from back in Oceanside where she had as many riders as she could autograph her white cycling shorts.

She sums up her effort with this, “You don’t have to be the fastest or the strongest but you can compete against yourself and achieve amazing results as long as you focus on what you can do versus what you can’t do.”

Thank you Vaune. Some of us, I feel, must now put aside whatever excuses we’ve been making and go ride our bikes. 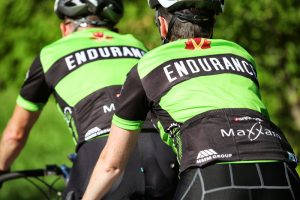