Ten cyclists participated in the Toronto Chapter’s first brevet of the season, including two doing their first brevet – Michael and Graeme, “welcome”!
We had perfect Spring-weather conditions, the most benign in memory for this late April event which often brings challenging winds and bitter temp’s. Yesterday was sunny until late afternoon, no wind to speak of and comfortable cycling temp’s starting at 2C to a high of 12C in mid-afternoon. Spring is evident everywhere – grasses are all bright green, waterways running fast, blackbirds are starting to establish their territories and every pond seems to have been claimed by a pair of geese or ducks.
Finish times were between 7h53m and 10h30m, so everyone seems to have had a relatively successful ride. Here’s looking forward to the next big event! 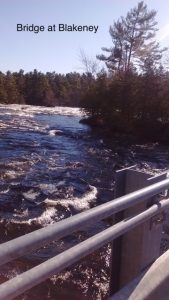 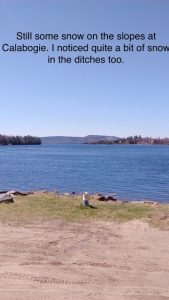 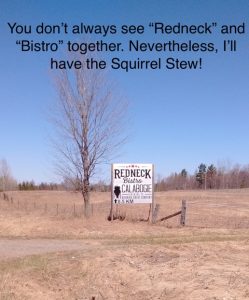 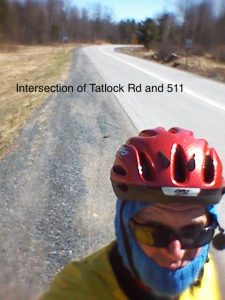 On April 2, two riders set out from Stittsville to ride the Merrickville 200 as a permanent. And, indeed, the wind was howling!

Actually, the day started off peacefully. Alan R. on his fixie and I on my non-fixie made good time riding into Merrickville with only a slight headwind near the end of the first section. The forecast had called for winds out of the southwest, showers, and then clearing as a cold front moved through, but conditions for the first 52 km were ideal.

After a brief stop at the Village Bean, we congratulated ourselves on the weather. Clearly, the weather gods were not pleased by this display. In the span of what seemed like only a few minutes, the wind began to howl and did not let up for the rest of the ride. We had to go straight into it on the road to Jasper, and naturally the rain began as well. Fortunately, by the time we turned northwest around the 91 km mark, we picked up the tailwind and the rain had stopped.

Just before Greenbush, we encountered what felt like ice pellets. I thought to myself, “what in the seven circles of hell is this?!” The shower didn’t last long but was a good reminder that you can face all kinds of conditions this early in the spring. Still, we pushed forward through to the second control at North Augusta where we had some lunch. Our time had slowed considerably in the wind, but I felt we should now have a tailwind most of the way home.

It was not to be.

We did pick up a boost on the way to Oxford Mills and that lifted our spirits. But the last 61 km from there to the finish was head on into a brutal, gusting northwest wind. We took turns at the front but it was mentally and physically exhausting. At one point, the wind whipped across open fields and almost blew the bikes off the road. For the longest time, our travel speed ranged between 11 km/h and 17 km/h. It was tough. But I kept hearing Peter Grant’s voice in my head, “Keep riding… just keep riding”, and so that’s what we did.

While doing so, I thought about some of the things we’d seen on the ride. Horses, cattle, ducks, geese, a blue heron, wild turkeys, dogs of all sorts, a llama farm. Roadkill Report: garter snakes, frogs, squirrel, fox. Then there was the old fellow on the road to Oxford Mills who had set up bird houses on all of his fence posts.  He was checking them out and waved as we rolled by.

After a quick stop to refuel and take a break from the road in Richmond, we tackled the last 20 km – again into the wind. I noticed at this point that the temperature was really starting to drop and I was ready to be home. I had a roast beef dinner waiting for me there, and Susan texted to say that she’d made cookies!

The Shea Road from Richmond to Stittsville was a real mess. It looked like it had been carpet bombed or something. Big potholes, broken pavement, crumbling asphalt at the sides… it was possibly the worst road I’ve been on. Alan was in full beast mode, and fortunately for me, hauled my sorry butt through the last remaining kms. As we passed Scotiabank Place, people and cars were everywhere. Apparently, Garth Brooks was playing.

Finally, we rolled into the finish at the park and ride with a time of 12:07. It was a long ride, to be sure, and I can still hear that wind in my ears!